Anna Landewe is president the Saugerties Lighthouse Conservancy board of directors, and also a resident lighthouse keeper. She is a lifelong artist with years of experience in traditional scrimshaw techniques. Anna teaches the Scrimshaw series at RWBS.
​
Michael Puryear is an internationally known furniture maker, studio designer, and teacher with 30 years of experience. He has taught college-level courses and has built a number of small wooden boats using the stitch & glue technique which results in strong light weight boats. He teaches the Foundations of Woodworking series, furniture building, and boat building at RWBS.

Bill Sterling is a retired art teacher with 30 years experience. He has been building guitars for 10 years and teaching guitar building for three years. He studied with Dave Nichols at Custom Pearl Inlay in Malone, NY. Bill is also the education coordinator for the Hudson Valley chapter of the Northeast Woodworker's Association. He teaches instrument building at RWBS.

​John VanBuren is a member of the Hudson Valley chapter of the Northeast Woodworker's Association. He teaches paddle carving and boatbuilding at RWBS.

Jack Weeks is an experienced timber framer and has built many of the timber frame structures on the museum campus. He is a board member of HRMM and teaches timber framing for RWBS.

Andrew Willner is a longtime woodworking artist with extensive woodcarving experience. He teaches carving and joinery classes for RWBS. 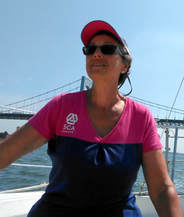 ​Jody Sterling
Jody earned her Coast Guard Captain's License and is a US Sailing Certified Small Sailboat Instructor and a US Sailing Certified  Basic Keelboat Instructor.  She is a lifelong sailor who grew up racing Blue Jays, Lightnings and keel boats on Long Island Sound. Jody owns a C & C 26 racer/cruiser with her husband and partner Bill Sterling. They race their boat on the Hudson, day sail and do coastal cruising. Jody retired in 2017 from teaching English for 29 years at Dutchess Community College and has combined her love of teaching and her love of sailing to become the Sailing Program Director at HRMM.   Jody is also the Race Committee Chair of the Kingston Sailing Club. ​ 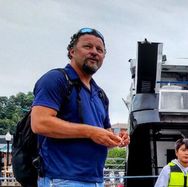 ​Gunter Spilhaus
Growing up in South Africa, Gunter comes from a family of sailors.  He started sailing at the age of 6 in Optimists, and progressed through the ranks to Keelboats. Gunter joined the South African Navy as a Diver and quickly become a Dive Supervisor.  Sailing competitively on large boats all around the Southern tip of Africa he solidified his love of sailing. Gunter earned his USCG Capt license and holds a Level 3 Coastal Kayaking Instructor.  After 20+ years of managing outdoor adventure events, running teambuilding programs and guiding tours, he is as comfortable teaching kids in a summer program, as he is presenting to upper management at a corporate event. Gunter is an avid mountain biker and when not sailing, is hiking, biking or skiing with his wife and two daughters. ​​ 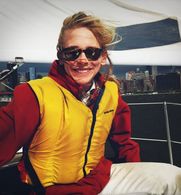 ​Christin Ripley
Christin grew up on the Gulf Coast of Florida where she learned how to sail. She has worked on tallships transiting the US East Coast and Caribbean, and sail-freight on the Hudson River. She's taught at sailing schools in Baltimore, Cape Cod, New York City, and NY's Hudson Valley. She holds 100ton Inland USCG License, and US Sailing Level I and Basic Keel Boat Instructor Certification. When not sailing, Christin is designing and fabricating textiles in her Catskill shop "Objects 'n the Round". 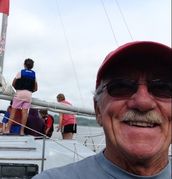 ​George Minervini
George grew up sailing Sunfish, Lasers and then, as a teenager, a small (16 foot) keel boat on a fresh water lake in Connecticut. During the 1980s he graduated to offshore sailboat racing and trained with the Royal Yachting Association in the U.K. and received various Certificates of Competence including: Day Skipper and Watch Leader, Coastal Skipper, and Offshore Yachtmaster. He has sailed in the Carribbean, Mediterranean, Indian Ocean, Pacific Ocean and Sea of Cortez. George currently holds a Captain's License from the US Coast Guard and is a US Sailing certified Level 1 instructor.

Jack Arnold
Jack grew up around boats in northern Minnesota and first sailed a plywood pram at age 10.  He began racing in his late twenties and soon added wind surfing and keelboat cruising to his list of sailing interests.  In 2011, Jack moved to the Hudson Valley and in 2014 began racing with the Kingston Sailing Club.  To date, Jack has accumulated several hundred days of charter sailing on Lake Superior, the Caribbean, the Mediterranean, Long Island Sound, and Chesapeake Bay.  In addition to his US Sailing Level 1 Instructor certification, Jack has completed US Sailing certification for Basic Keelboat, Basic Cruising, Bareboat Cruising, Coastal Passage Making, Coastal Navigation, and Cruising Catamaran. 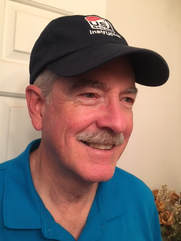 ​Tom Burrows
Currently retired, Tom has a lifetime of extensive coastal and inland recreational sailing experience. He has explored the many sailing destinations of Southern New England, Cape Cod, Narragansett Bay and the islands of Martha's Vineyard, Cuttyhunk and Block Island. A long term kayak enthusiast he has ventured onto the waters of Bar Harbor Maine and the Eastern shore of Nova Scotia. Having migrated from New England to the Hudson Valley some 20 years ago, Tom can now be found sailing his 25’ C&C sloop “Morning Star” in the nearby reaches of the Hudson River, enjoying both the challenges of frequent tacks between Dutchess and Ulster shores and meetings with commercial ships, tugboats and barges. As a Certified level II (PSIA 10 Year) ski instructor during the winter months; passing along the outright fun as well as the technical expertise of sailing is Tom’s most recent quest, and he has recently been certified as a Small Boat Instructor Level 1 by U. S. Sailing.
Dan Feldman
Dan  is a U.S. Coast Guard licensed captain. He has been sailing and racing for most of his life on boats of all sizes including his trimaran Cirrus.  He is also a former instructor with the National Outdoor Leadership School, and has extensive experience climbing, mountaineering, ski patrolling and teaching nordic skiing. An avid gardener during the warm months, Dan spends his winters working in his studio, amateur ski racing and working as a charter captain in the Caribbean. 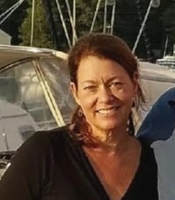 ​Tish Osborne
Tish’s passion for sailing began on the Ottawa River in Canada where she spent her summers and her only means of transportation was a Butterfly (a fun, lightweight, 12’ small lake sailboat).  As a teen, she learned to single-hand the family Hobie 16’, and from 2000 and 2005 she raced and lived aboard “Lapwing” (1955 34’ classic wooden sailboat) on Martha’s Vineyard, MA.  In 2008, Tish moved back to the Hudson Valley where she enjoys teaching sailing in the summer and skiing in the winter.  When she is not on the water or mountain, she works for Philips Healthcare as a National Distribution Manager. Tish is also fluent in Spanish.

Scott has provided coaching services to the RRC in its Learn to Row program, Indoor Rowing ergometer program at the YMCA of Kingston and Ulster County and Indoor Rowing at the USMA West Point. He also works with RRC crews on the Rondout Creek and the Hudson River, training and preparing for competition. He has brought RRC crews to the Head of the Fish and the Head of the Charles River as well as to local competitions. He has also provided coaching services to the New Hampton, CT High School rowing program.