About the Boatbuilding Challenge

Team info coming as they register.
Register your team here

History of the Boatbuilding Challenge

The Wooden Boat Challenge was started in 1981 by John Hansen- current publisher of Boats and Harbors Magazine- and was held at the Newport, RI wooden boat show. The Sika adhesives company sponsored that ﬁrst event, a quick and dirty boat building contest featuring six teams building any boat they cared to build and then racing them. Racing the boats has been a fundamental part of the contest ever since.

The ﬁrst one-­design boat building contest, featuring the TEAL, a double-ender design by Phil Bolger, was held four years later at the Oyster Festival in Norwalk, CT. The TEAL design remained in use until 2001 when Willie French of Georgetown, SC (by way of New Zealand) and his partner set an unbelievable record of ONE HOUR, ELEVEN MINUTES AND THIRTY-FOUR SECONDS.

The bar had to be raised. In 2002, “B” Coleman of Seaco Yacht Design in Lexington, KY, was asked to design a more challenging skiff. The result was the handsome GEORGETOWN BATEAU which remained the Challenge boat until 2007. Then, Phil Bolger’s version of the MONHEGAN SKIFF was introduced, but it was a bit too challenging – too many teams were unable to finish the boat in the four-hour time limit. A happy medium was reached in 2010 when “B” Coleman got busy again and came up with the CAROLINA BATEAU, which combines challenge with beauty.

In 2007, the National BoatBuilding Challenge was organized by WoodenBoat Magazine as a circuit of regional boat building contests.  In 2008 the Monhegan Skiff design was introduced, but proved to be too challenging for builders to complete in four hours. In 2010 the Carolina Bateau design was introduced and is still in use.

Our friends in Beaufort, NC have helped us a lot in developing the Hudson River Boatbuilding Challenge. To see more about what the challenge is like, check out this video they put together!

Boatbuilding on the Hudson 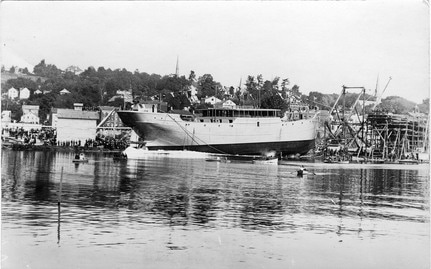 The launching of the "Esopus," on Rondout Creek, 1918. Hudson River Maritime Museum Collection.
Boatbuilding has a long tradition on the Hudson - from indigenous dugout canoes to steel warships. The Hudson Valley towns, particularly Newburgh and Kingston, were major centers of ship and boatbuilding for trade on the river, New York City, and beyond. Smaller upriver towns like Athens and New Baltimore also had busy yards building tugboats, smaller steamboats, and doing repair work.

At Newburgh ocean-going sailing ships were built in the early 19th century.  In the late 19th and early 20th centuries, Marvel Shipyards built many large ferryboats for use in New York Harbor and on the Hudson, as well as large passenger steamboats like the Hudson River Day Line’s Hendrick Hudson of 1906, one of the finest and handsomest steamboats ever to sail the Hudson. At Rondout during the 19th century the majority of vessels built were wooden canalboats, barges, and scows because of the need to transport the coal coming over the Delaware & Hudson Canal from 1828 to 1898, and other local products as well.

During World War I in 1917-1918 and World War II from 1942-1945, Newburgh, Kingston, Nyack, and New Baltimore all had busy war contracts that employed thousands in their shipyards. At Kingston, Hiltebrant’s built wooden minesweepers and subchasers for three different wars, including the Korean War. At Island Dock on the Rondout wooden freighters were built for World War I, wooden ocean-going rescue tugs were built for World War II, while landing craft were built in the early 1950s.  Until the 1950s all of the boats and ships built along the Rondout were made of wood.  During war times older workers came out of retirement to teach the many young workers required for the war efforts the skills of building wooden boats.

Rob Dwelley
Rob started wooden boat building competitions in the late 1980’s while affiliated with Wooden Boat Magazine. He continues to support the local Challenges in Georgetown, SC, Beaufort, NC, and Belfast, ME each year, standing on the ladder doing the play-by-play announcing at the challenge event. And rest assured he knows what he is talking about. He was first a carpenter 40 years ago and is still a carpenter today. Not to mention that Rob and Mark Bayne (our Cape Fear Community College Boat Building Program Director) are reigning Masters of the National Boatbuilding Masters Challenge last held in Georgetown, SC in 2014. We appreciate Rob & could not continue these competitions without his enthusiastic involvement. Rob, who lives with his wife Sarah in hope Maine, is a master-of-all-trades boat builder, carpenter, lumber broker, and retired Outward Bound Director. He currently has a flourishing home inspection business, Meticulous Home Inspections.