The Follow the River Lecture series is sponsored by Rondout Savings Bank.
For more than a decade the Hudson River Maritime Museum's "Follow the River Lecture Series" has hosted historians, authors, and maritime experts for engaging illustrated talks on a variety of regional history, and maritime subjects. In recent years, many of the lectures have also been recorded and made available on the museum's YouTube channel:
www.youtube.com/@HudsonRiverMaritimeMuseum/videos.
For more information about upcoming lectures, please visit our events calendar or see the list below. If you would like to give a lecture as a guest speaker, please contact the museum's education department at education@hrmm.org or call 845-338-0071 ext. 16.

Upcoming Lectures: All 2023 Lectures Will Be Offered In-Person and Virtually.

​ All lectures are $7 for the general public, and FREE for Hudson River Maritime Museum members. Join today!

​Wednesday, January 4, 2023 - "Stories of Marginalized Workers on the D&H Canal"

Bill Merchant,  Deputy Director for Collections, Historian and Curator of the D & H Canal Museum
7:00 PM
In-Person at the HRMM Wooden Boat School
or Virtual via Zoom link
​
​The construction of the 108-mile-long Delaware and Hudson (D&H) Canal required about 5000 laborers working in hard and dangerous conditions.  During its seventy-years in operation, the Canal created an important source of work for the laborers needed to move the many thousands of tons of goods and resources along it annually. Some workers found economic opportunities and independence, but others were exploited and subject to poor working conditions. D&H Historian Bill Merchant will give a presentation on the marginalized workers on the D&H Canal. Learn about the lives and diverse experiences of the people of color, women, immigrants, and children who built and worked on the Canal.
Register Here

Did you know? Amusement parks of all sizes once dotted the shores of the Hudson River, many at or near major Hudson River steamboat landings. Carousels, Ferris wheels, roller coasters, and rides stood alongside swimming pools, boat rentals, and bandstands. With its population growth and its close proximity to New York City, the Hudson Valley was a natural setting for these popular parks, which lined both sides of the Hudson before the turn of the 20th century. Tourists and locals alike were transported to the parks first by Hudson River steamboat or trolley car, and later by automobile.
​
In this virtual lecture, local historians Wes & Barbara Gottlock, authors of the book Lost Amusement Parks of the Hudson Valley, will highlight some of the impactful parks that reigned as recreation meccas for millions of people for over 50 years.
Register Here

Wednesday, February 23, 2022 - "The World of Elizabeth Jennings"
Jerry Mikorenda, author and historian
7:00 PM | Virtual via Zoom
For many, the civil rights movement began with Rosa Parks’ brave stand against segregation in 1954. However, few people realize that the right for African Americans to even ride in streetcars was earned a hundred years before that in a landmark civil rights case here in New York State.

In 1854, traveling was full of danger. Omnibus accidents were commonplace. Pedestrians were regularly attacked by the Five Points’ gangs. Rival police forces watched and argued over who should help. None of this was on Elizabeth Jennings’ mind as she climbed the platform onto the Chatham Street horsecar.

But her destination and that of the country took a sudden turn when the conductor told her to wait for the next car because it had “her people” in it. When she refused to leave the bus, she was assaulted by the conductor aided by a NYC policeman. Elizabeth Jennings fought for the right to ride New York City horse trolleys, with future president Chester A. Arthur as her defense lawyer.

Historian Jerry Mikorenda breathes life into this little-known struggle with “The World of Elizabeth Jennings,” based on his book, America’s First Freedom Rider: Elizabeth Jennings, Chester A. Arthur, and the Early Fight for Civil Rights (Rowman & Littlefield). Using rare period photos and lithographs, the author recreates Jennings’ world by exploring the sights and people of old New York as the momentous battle with the Third Avenue Railroad unfolded. The freedoms Elizabeth Jennings fought for – and won – are the underpinning of the civil and gender rights movements that are still a battlefront today. There are rare moments when we can look in the mirror of history and see our own time. America’s First Freedom Rider shows those times are not unlike our own.
Register Here

Wednesday, March 16, 2022 - "Espionage and Enslavement in the Revolution: The True Story of Robert Townsend and Elizabeth"
Claire Belljereau, author and historian
7:00 PM | Virtual via Zoom

​Join Claire Bellerjeau for a talk about her new book, “Espionage and Enslavement in the Revolution: The True Story of Robert Townsend and Elizabeth” and discover the story of Elizabeth, or Liss, enslaved by the Townsend family whose son Robert was Washington's spy in Manhattan as part of the Culper Spy Ring. As Robert and Elizabeth’s story unfolds, prominent figures from history cross their path, including Benjamin Franklin, Alexander Hamilton, John Jay, Jupiter Hammon, Benedict Arnold, John André, and John Adams, as well as participants in the Boston Massacre, the Sons of Liberty, the Battle of Long Island, Franklin’s Paris negotiations, and the Benedict Arnold treason plot. Her escape with the British, re-enslavement, and struggle for freedom gives a new perspective to the country's founding, from the point of view of an enslaved Black woman seeking personal liberty in a country fighting for its own.
Register Here 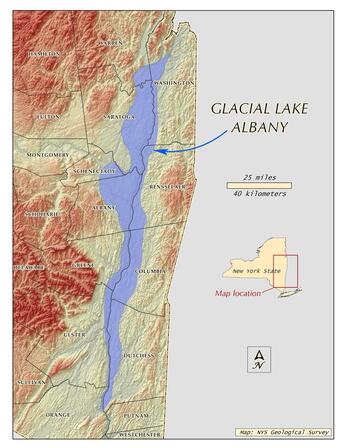 ​The world beneath our feet has undergone millennia of tremendous change. Join educator Audrey Trossen as she walks us through the geologic history of the Hudson Valley, from hundreds of millions of years ago to the near-present and into the distant future. How does the climate of the past affect the way we use land today? And how will our actions today impact our world as we march into the future? This lecture introduces the geologic history of our region and invites guests imagine the geology the Hudson valley long after we have left it.
Register Here 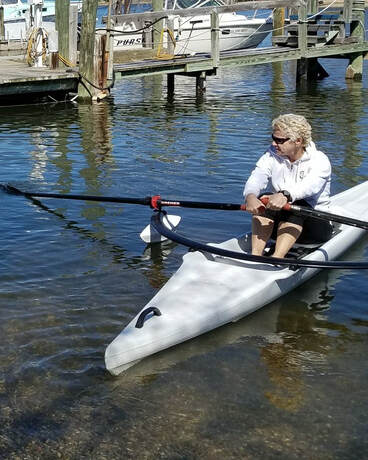 There are many reasons to have an interest in rowing: its history, its evolution, the physics, the geography, the techniques, the benefits, the joy and the pain. There are a million stories to tell about it. This one is from rowing aficionada, Nelsie Aybar-Grau.

It all started when Nelsie moved to Kingston and she was introduced to rowing by a friend. After a few years she became certified on the Concept2 indoor rowing machine, then she picked up a Learn to Row Instructor's Certification from US Rowing. To track all the interesting things she found out about rowing she created a Facebook page and website: theRondoutRower.com. Then when asked to teach young participants in the HRMM Youthboat Project how to row a traditional wooden Whitehall boat, her interest in rowing went into high gear. Last summer she built a wooden tandem wherry AND participated in a row around Manhattan. Why is rowing so compelling, you ask? Join us and see!​
Register Here 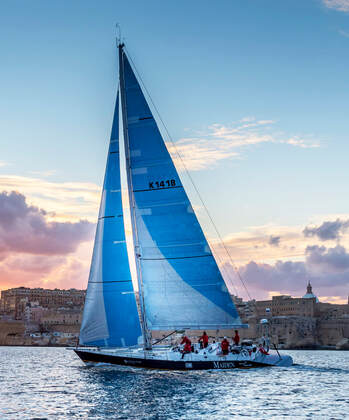 Tracy Edwards MBE inspired a generation of women as the skipper of Maiden. She led the first all-female crew to compete in the notoriously difficult Whitbread Round the World Race in 1988/89.

Fast forward to 2014 when Tracy learned that Maiden had been abandoned and was rotting away in the Seychelles.  She knew that she had to save this unique piece of maritime history and set about raising funds to buy her and bring her back to the UK.  In April 2017 Maiden was shipped to Southampton and began an extensive restoration and refit and "The Maiden Factor" project was born.
​
Tracy Edwards MBE rose to prominence when she Skippered Maiden, the first all-female crew to sail around the world when Maiden raced in the 1989/90 WRTWR. Maiden came second overall and Tracy became the first woman in its history to be named Yachtsman of the Year. Tracy then created and skippered  the first all-female crew to attempt the Jules Verne, Non-Stop Round the World Record.  In 2000 she created and managed the world’s first mixed gender racing team and in 2005 the first round the world race to start and finish in the Middle East. Now runs The Maiden Factor.

"Educating girls, everywhere, is one of the smartest investments we can make to lift communities out of poverty, grow economies and build back better from the pandemic."
Register Here
Find out more about Maiden's ​upcoming visit here 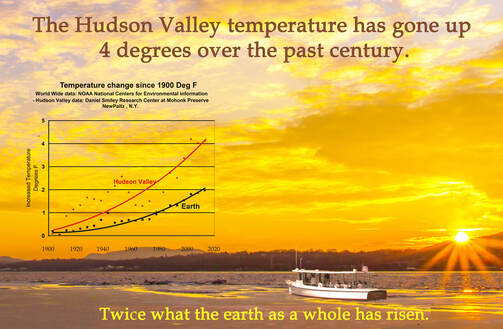 Russ Lange and Meg Clark discuss how climate change will affect us here in the Hudson Valley. The signs of climate change are all around us; rising sea levels, more frequent and severe storms, heatwaves, and droughts are becoming the norm both globally, and right here in the Hudson Valley. Scientists warn that we must take significant action this decade to save ourselves from the most serious consequences of a warming earth. Learn what the HRMM is doing to educate the public about the causes, consequences, and actions that we can take to meet this challenge with its new exhibit, Warming Signs: Climate Change in the Hudson Valley. Participants will have the opportunity to tour both the new indoor and outdoor exhibits which are scheduled to open in June.Russ Lange and Meg Clark talk about how climate change will affect us
Register Here 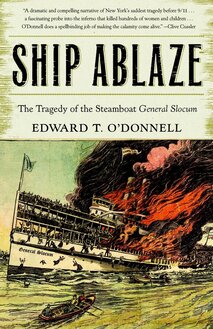 Wednesday, June 8, 2022 - "The 1904 General Slocum Disaster: New York’s Deadliest Day before 9/11"
Edward T. O'Donnell, historian and author
7:00 PM | Virtual via Zoom
​
This talk details the extraordinary story of the burning of the steamboat General Slocum, the deadliest day in New York City history before September 11. More than 1,000 New Yorkers perished on June 15, 1904 when their steamboat burst into flames on the East River.  A panicked and untrained crew, coupled with rotten life preservers and inaccessible life boats, turned a small storage room fire into a human tragedy of immense proportions. News of the horror made headlines around the world and elicited an enormous outpouring of sympathy and donations. Later, as evidence of negligence and corruption on the part of the steamer's owners mounted, sympathy turned to outrage and demands for justice that were never fully met.  This talk brings to life this gripping tragedy and the wider, compelling story of innocents lost, heroes made, and a city and people that overcame.​
Register Here 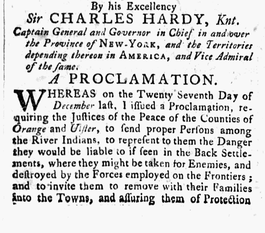 Dr. Tom Midtrød discusses an attempt by the colonial governments of New York and New Jersey, as well as Sir William Johnson, the British superintendent of Indian affairs, to remove members of Algonquian-speaking Native groups from the wider Hudson Valley region during the Seven Years’ War, also known as the French and Indian War, which took place from 1754-63. As the crisis of war and paranoia spread among the colonial population, government officials exploited and exaggerated individual acts of violence against local Native groups to encourage them to leave the Hudson Valley, resettling first among the Mohawks and later farther west.
Register Here
More Lectures Coming Soon!

2023 Lecture series will be hybrid events. You may attend in person or join us virtually through Zoom . If you or someone you know would like to present a lecture at HRMM, please email  edication@hrmm.org.

Did You Miss A Lecture?

With permission from our speakers we are now able to film some of our lectures, so you can catch up on ones you missed! Due to restrictions, not all lectures may be available on video or in full. Watch via our Lecture Series playlist on YouTube. Newest lectures are at the top. Please subscribe to our YouTube channel to get notifications of new recorded lectures and other films and videos.