The visit from fireboat John J. Harvey scheduled for this weekend has been cancelled. There was a last-minute positive Covid test on the operational crew. Because of the resulting quarantine for crew, the fireboat visit has had to be cancelled. Any reservations will be refunded. We apologize for this inconvenience and look forward to having Harvey and the team back at the museum when they're ready. If you have any questions, please call us at 845-338-0071. 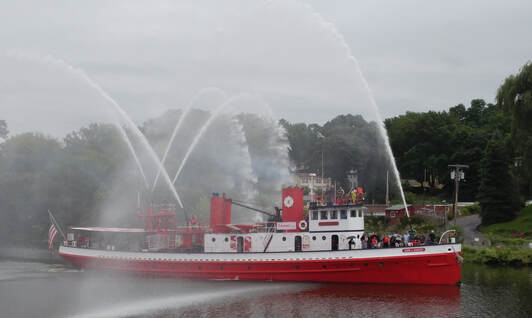 We're excited to welcome Fireboat John J. Harvey to the museum’s waterfront campus from Friday, August 13 to Monday, August 16. Harvey will be making stops throughout the Hudson Valley as part of her Hudson River trip this summer and will be at the Kingston waterfront offering free public trips and deck tours.

People who enjoy a deck tour or trip on the boat will receive half-price admission to the museum.

Fireboat John J. Harvey, launched in Brooklyn in 1931, was named for FDNY pilot John J. Harvey.  Firefighter Harvey was killed in the line of duty fighting a ship fire. Harvey was a historic first; the first fireboat powered by internal combustion engines and the first that could pump and maneuver simultaneously. She was the largest, fastest fire fighting machine of her time, capable of pumping 18,000 gallons per minute, roughly the equivalent of 20 terrestrial fire trucks. The innovations of her design influenced all subsequent fireboats.

All trips on John J. Harvey are free. Trips lasting 30-45 minutes will venture out onto the Rondout Creek and each trip can accommodate up to 70 people. Registration is required for trips and links appear below. These opportunities are available first come first served. Attendees will be prompted to pay a nominal deposit for registration which will be refunded after their arrival. Deck tours do not require registration.

People are also invited to travel to and from New York City on Harvey on August 12 and 16. Visit www.fireboat.org for details.

Harvey will be in Kingston for the following days:

​Harvey served and protected NY Harbor for over 6 decades, assisting during such notable fires as the Cunard Line pier fire in 1932, the burning of Normandie in 1942, and the potentially disastrous fire on ammunition ship El Estero during World War II. Decommissioned in 1994, Harvey was saved from the scrap yard by a dedicated group of volunteers and restored as an operational museum and education center, offering free public trips in New York Harbor, and attending notable maritime festivals in Waterford and Oyster Bay in NY, and Mystic and New London in CT.

On September 11 2001, John J. Harvey was recalled to service by the FDNY and reactivated as Marine Company 2. Alongside the FDNY fireboats Fire Fighter and John D. McKean she pumped water for 80 hours until water mains in lower Manhattan were restored to service. Harvey's action that week was the subject of countless print and video news articles as well as a 2002 Maira Kalman book Fireboat: The Heroic Adventures of the John J. Harvey.