FRIDAY EVENINGS THROUGHOUT SUMMER AND FALL
​Enjoy sampling sunsets, food, and history aboard the Solaris on Friday evenings, covering a variety of topics. This informal chat with food historian Sarah Wassberg Johnson will feature samples from local producers with varietal histories and tasting notes.

Tickets include tasting snacks, house red and white wine, and still and sparkling water. Additional snacks may also be included, along with tasting note cards. 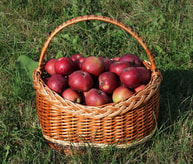 APPLE TASTING
The Esopus Spitzenburg was Thomas Jefferson’s favorite. Millions were grown here, in hundreds of varieties, and shipped as far away as Germany. Even today apple orchards dot the banks of the Hudson River. Learn about why Americans eat so many apples, why New York was and still is one of the world’s biggest producers, and how American apple pie is really Dutch New York apple pie. Taste local heirloom apples and learn their individual stories.

BOOZE & PROHIBITION
In 1920, Congress passed the 18th Amendment, banning the manufacture or sale of alcoholic beverages in the United States. But that didn’t mean people stopped drinking. Learn about the connection between alcohol and crime in the Hudson Valley and how people kept manufacturing - and drinking - alcohol until the 21st Amendment repealed Prohibition in 1933. Try samples from local breweries/distilleries/cideries and enjoy with cheese and crackers. 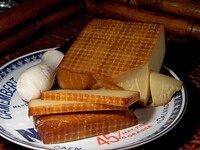 CHEESE TASTING
New York Cheddar, Velveeta, Liederkranz - what do all these cheeses have in common? They were all invented in New York. Learn about why New York has such a large dairy industry and its connection to cheese in the Hudson Valley. Taste and compare local and historic cheeses. CHOCOLATE TASTING
A Jewish family helped bring chocolate to New York in the early 18th century. Soon, everyone was drinking it (yes, drinking it). Chocolate production has a long history in the Hudson Valley, and New York City was a hub for Atlantic trade and sugar refineries. Learn all about America’s favorite flavor and its Hudson Valley connections. Taste samples from local chocolate purveyors HONEY TASTING
Bees are essential pollinators for thousands of Hudson Valley farms and orchards, but did you know that honeybees are not native to the United States? Learn about the history of honey from ancient times to the present and beekeeping in the Hudson Valley. Try a variety of different honeys with bread and butter.
Sarah Wassberg Johnson is a food historian who has been featured on seasons 1 and 2 of The History Channel’s “The Food That Built America” and in documentary films, on radio and podcasts, and publications such as NPR, The Atlantic, CNN, Gastro Obscura, and more. You can find her work and more at www.thefoodhistorian.com. She also happens to be the Director of Exhibits & Outreach at the Hudson River Maritime Museum!

RATES
All tickets include boat ride, tastings and beverages, and general admission to the Hudson River Maritime Museum.
Adult (17-61): $45
Senior (62+): $42
Please note: Due to the presence of alcohol, children are not allowed on this cruise.
Book Now